According to the American Tinnitus Association, tinnitus affects over 50 million Americans, and further research from the Hearing Loss Association of America revealed that 90% of people with tinnitus also have hearing loss. Tinnitus is often referred to as ringing in the ears, and is a symptom of a wider problem with the auditory pathway.

They improve overall hearing, particularly how well you hear external sound. This makes you less focused on the inner sounds caused by tinnitus. Restoring external sound also helps to reduce auditory deprivation. Put simply, hearing aids help you better process what people are saying to you when having a conversation.

So now we know the benefits of hearing aids for relieving tinnitus, what hearing aids should you go for? Below, you’ll find five of the best hearing aids that can not only help with tinnitus, but general hearing loss too.

While Eargo doesn’t have a specific tinnitus relief feature like some other brands, many wearers of Eargo have reported a reduction in symptoms thanks to their in-the-canal hearing aids.

They do this by amplifying external sounds which significantly lowers the volume of the irritating tinnitus sounds. Eargo hearing aids are also very discreet, making it a great choice for those who dislike their hearing aids being too visible.

Eargo is also an excellent choice if you’re a veteran. Tinnitus is one of the most common conditions among veterans, and Eargo provides a 10% discount on their Eargo 5 and Eargo Neo HiFi devices to veterans.

Widex’s product line includes four different hearing aid models, all of which can be connected to their tinnitus relief app, Zen. The app focuses on sound therapy, an aspect of tinnitus therapy.

These sounds are selected by the dispenser or via the Zen smartphone app and can be adjusted by you! When your tinnitus flares up, just open Zen and then adjust the level or type of sound to properly distract you from the tinnitus sounds. Widex is a good choice for those who find sound-masking beneficial.

Signia’s hearing aid line is sure to have something for you, offering five different devices with 13 style options. They also have a unique approach to tinnitus treatment, called Notch Therapy (NT).

Notch Therapy can seamlessly fit in with any current tinnitus therapy you’re undergoing, and data from Signia shows that NT was effective for patients with mild to moderate hearing loss and tonal tinnitus.

The goal of NT is to recalibrate the brain’s inhibition system for the specific tone of the perceived tinnitus. It’s an extremely targeted approach that helps the brain take control over the tinnitus.

With the Enjoyee hearing aid you have 3 different frequency modes and 4 types of volume to choose from so you can clearly hear sound no matter where you are and how loud it is. These hearing aids are also easy to wear and you can wear them anytime.

They also have a double nose reduction function, a newly upgraded smart chip where the noise reduction has been increased by 30%. This makes for a more natural and overall more pleasant listening experience. The Enjoyee hearing aid has been designed for all types of hearing loss, and the angle of the earplugs can easily be adjusted, suitable for both left and right ears.

They are also made of the latest and safest materials, with a nano-coated shell that is waterproof and sweatproof. The domes are available in different sizes and are suitable for all kinds of ears. They also come with cleaning tools to give them a longer life, and are small enough to fit discreetly into your ear canal. They also have FCC ROHS certification.

They are also rechargeable - no need to constantly change the battery! The sound amplifier reaches full charge after 2-4 hours. You can get 80 hours of use with the sound amplifier before it needs to be charged again. The hearing aids are also easily portable, coming in a small box that you can take anywhere.

MDHearing hearing aids were invented by an ENT surgeon to be precisely turned to the range of sounds associated with the human voice. These hearing aids are excellent for the 94% of Americans with mild to even severe hearing loss.

These hearing aids are also rechargeable, with no need to keep replacing tiny hearing aid batteries. This is thanks to the VOLT - a high quality rechargeable hearing aid with a long battery life that combines the latest medical-grade technology with a discreet design.

The advanced technology of the MDHearing hearing aids provide excellent background noise reduction with multiple state-of-the-art microphones that let you concentrate on the conversation in front of you and tune out background noise.

You’ve probably noticed that there’s a lot to take into consideration when choosing the best hearing aid to relieve symptoms of tinnitus.

However, not all hearing aids are designed specifically to help with tinnitus but can be beneficial nonetheless. Let’s take a look at some key features you should look out for when buying a hearing aid for tinnitus. 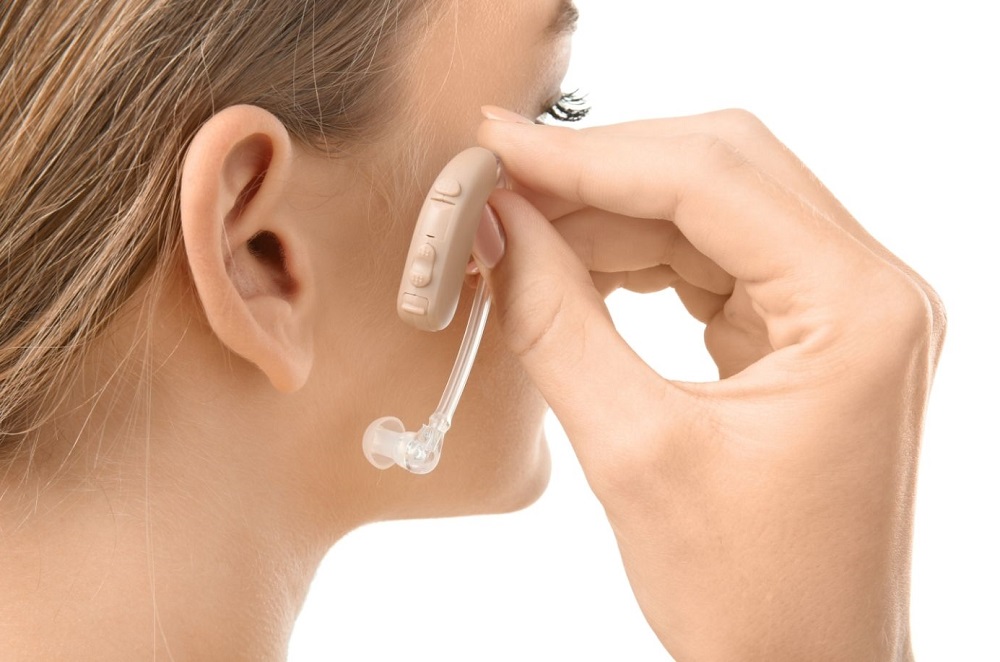 FDA Registered: Always look out for whether a hearing aid is registered with the Food and Drug Administration (FDA) as a medical device.

Technology: Try to look for hearing aids that use specific and targeted technology to provide relief for tinnitus.

Tinnitus may be caused by hearing loss. Those with hearing loss experience less external sounds reaching their brain. This causes neuroplastic changes in the brain that affect the way it processes different sound frequencies.

If you have tinnitus you may hear tinnitus sounds at the same frequency as external sounds you’re struggling to hear.

So if you have trouble hearing high-frequency sounds, the tinnitus sounds you hear may be high-pitched. This deprivation of external sounds can amplify the buzzing, clicking, ringing, roaring and whistling sounds of tinnitus.

Well-fitted hearing aids are a great first step in tinnitus treatment. Hearing aids can help to reduce tinnitus symptoms by concealing the irritating ringing sounds and drawing your attention to the external sounds you would otherwise struggle to hear.

So while hearing aids can’t stop tinnitus, they can help your brain drown out the tinnitus sounds and focus on other sounds. Make sure that your hearing aids are properly fitted for tinnitus management.

How much does tinnitus impact your life?

While hearing loss can be devastating and scary, many people with tinnitus have described it as having a bigger and more frustrating impact on their daily life than the hearing loss that goes along with it.

The medical community’s understanding of tinnitus continues to evolve, and while tinnitus pills and tinctures remain popular, there is scant evidence that they are all that effective.

Luckily, the medical community now has a better understanding of tinnitus being just as linked to the brain as it is to the ears. While doctors can’t cure tinnitus, they can inform you of the relevant treatments that can reduce the impact tinnitus has on your daily life.

Other tinnitus remedies include earwax removal, cutting down on alcohol, caffeine, and smoking, and even avoiding medications where tinnitus can be a side effect. Let’s take a look at some other helpful remedies in more detail.

Sound-masking devices: These provide a benign or pleasant external noise that somewhat drowns out the internal sound of tinnitus. Sound-masking devices are traditionally tabletop sound machines, but they can also be small, electronic devices that fit inside your ear.

They can play white and ambient noise, but also nature noises and music as well. Most people find an external sound level that is just a bit louder than tinnitus helpful, while some prefer a masking noise that totally drowns out the tinnitus noise.

Some people also use commercial sound machines to help them fall asleep, while others find headphones, TV, or even fans helpful.

We’ve already mentioned that tinnitus is one of the most common conditions affecting veterans of the armed services. This is perhaps unsurprising, as war environments - and even military training - can be loud and chaotic, greatly impacting one’s hearing.

If you’re a veteran, you can contact your local VA hospital to enquire about their tinnitus treatment programs. You can also consult the National Center for Rehabilitative Auditory Research (NCRAR) at the VA. They provide a tinnitus workbook and educational materials that can be hugely beneficial.

Treating dysfunctions and obstructions: The American Tinnitus Association has found that most cases of tinnitus are caused by hearing loss, but sometimes tinnitus can be caused by an irritation to the auditory system.

Tinnitus may also be a symptom of a problem with the temporomandibular joint (TMJ). If your tinnitus is caused by this, then a dental procedure or realignment of your bite may provide some relief.

Tinnitus may also be caused by an excessive buildup of earwax. Having earwax blockage removed may cause mild symptoms of tinnitus to disappear. Foreign objects lodged against the eardrum can also cause tinnitus. You can consult an Ear, Nose, and Throat (ENT) specialist who may perform an exam to check for obstructions in the ear canal.

Exercise: This may seem an odd treatment for tinnitus, but there’s no denying the positive effect exercise has on all parts of the body. Anxiety, depression, stress, illness and poor sleep can make tinnitus worse, but regular exercise can help you to manage stress, sleep better, and keep healthy.

Mindfulness: Again, this may seem an odd treatment, but in an eight-week course of mindfulness-based stress reduction (or MBSR) you can learn the skills needed to better focus through mindfulness training. While this program was originally designed to help people deal with chronic pain, it can be just as effective for tinnitus.

The results of a pilot study were published in The Hearing Journal and found that participants of an eight-week program noticed a difference in how they perceived their tinnitus and that they felt less anxious and depressed.

But you don’t need to enroll in a program to get started with some mindfulness training, and you can practice mindfulness at home. There are plenty of resources online that teach you how to practice meditation and breathing techniques that can help take your focus away from tinnitus.

However, it’s worth noting that none of these treatments are backed up by science. The herb ginkgo biloba has been said to be helpful but studies have been unable to prove this.

There are also lots of nutritional supplements out there that claim to be remedies for tinnitus, and usually include herbs and vitamins like ginkgo, vitamin B-12, and zinc. But these dietary supplements are not FDA approved and are not supported by science, although some people who suffer with tinnitus have found them to be helpful.

Sometimes referred to as ringing in the ears, tinnitus is commonly associated with hearing loss. It can be a debilitating and frustrating condition, but several hearing aids come equipped with special features that can relieve tinnitus, such as masking sounds and apps that provide relaxation exercises to draw your attention away from the tinnitus sounds.

Hearing aids for tinnitus are varied, coming in a wide range of styles and are suitable for multiple levels of hearing loss. Hearing aids are just one treatment for tinnitus, and can also be used alongside Cognitive Behavioral Therapy.

While tinnitus usually isn’t a sign of something more serious, if tinnitus affects your daily life to the point that you are finding it difficult to sleep, work, or hear normally consult your doctor. They will most likely examine your ears and refer you to an audiologist and otolaryngologist.

However, if you experience sudden hearing loss, drainage that smells particularly bad, facial paralysis, or a pulsating sound in sync with your heartbeat, go immediately to your local emergency department.